ABSTRACT: Species determination is crucial in biodiversity research. In tintinnids, identification is based almost exclusively on the lorica, despite its frequent intraspecific variability and interspecific similarity. We suggest updated procedures for identification and, depending on the aim of the study, further steps to obtain morphological, molecular, and ecological data. Our goal is to help improving the collection of information (e.g. species re-/descriptions and DNA barcodes) that is essential for generating a natural tintinnid classification and a reliable reference for environmental surveys. These suggestions are broadly useful for protistologists because they exemplify data integration, quality/effort compromise, and the need for scientific collaborations.

ABSTRACT: Determining the biomass of microbial plankton is central to the study of fluxes of energy and materials in aquatic ecosystems. This is typically accomplished by applying proper volume-to-carbon conversion factors to group-specific abundances and biovolumes. A critical step in this approach is the accurate estimation of biovolume from two-dimensional (2D) data such as those available through conventional microscopy techniques or flow-through imaging systems. This paper describes a simple yet accurate method for the assessment of the biovolume of planktonic microorganisms, which works with any image analysis system allowing for the measurement of linear distances and the estimation of the cross sectional area of an object from a 2D digital image. The proposed method is based on Archimedes’ principle about the relationship between the volume of a sphere and that of a cylinder in which the sphere is inscribed, plus a coefficient of ‘unellipticity’ introduced here. Validation and careful evaluation of the method are provided using a variety of approaches. The new method proved to be highly precise with all convex shapes characterised by approximate rotational symmetry, and combining it with an existing method specific for highly concave or branched shapes allows covering the great majority of cases with good reliability. Thanks to its accuracy, consistency, and low resources demand, the new method can conveniently be used in substitution of any extant method designed for convex shapes, and can readily be coupled with automated cell imaging technologies, including state-of-the-art flow-through imaging devices. 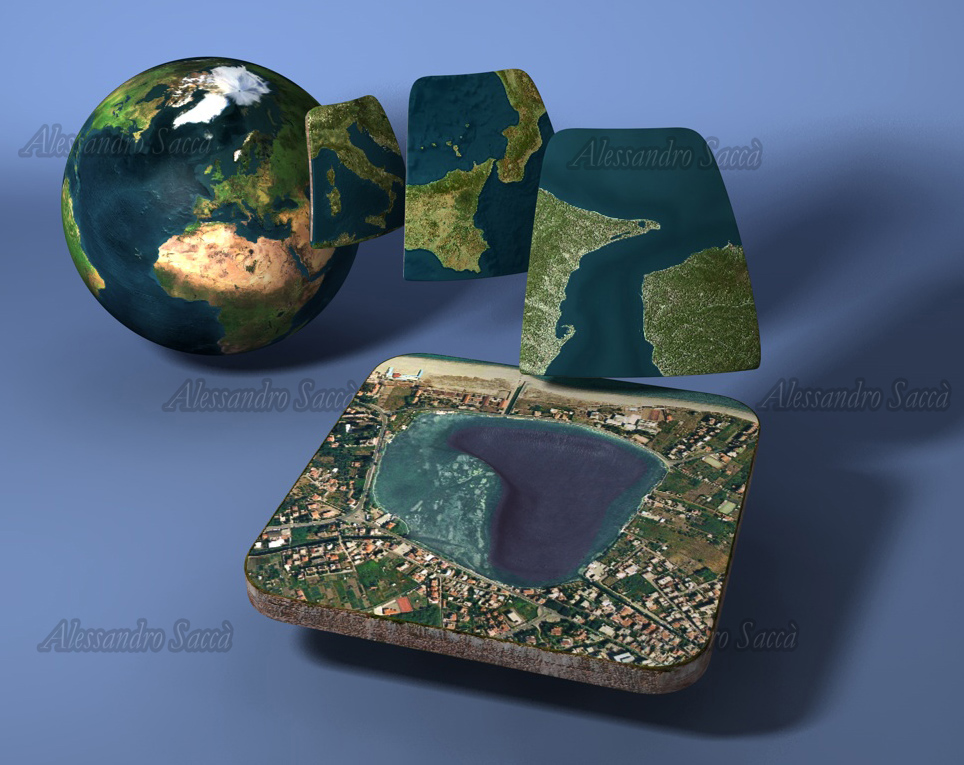 My most interesting studies were conducted on Faro Lake, a peculiar coastal basin located on the north-eastern tip of the Sicily Island (Central Mediterranean). Faro Lake, together with Ganzirri Lake, is part of the Peloro Cape Lagoon System, an oriented natural reserve at only 9 Km from the centre city of Messina.

The two lakes most probably originated between 3000 and 2500 b.C. from a previously existing coastal lagoon. This, in turn, derived from fluvial detritus that was transported by marine currents until forming sandy dunes which enclosed part of the sea at the mouth of the Straits of Messina. The coastal lagoon later broke up into four smaller lakes, two of which eventually merged to form Ganzirri lake, another one was artificially drained about two centuries ago, whereas Faro Lake underwent only minor changes.

Faro Lake (38° 16’ N, 15° 38’ E) features a surface area of about 263,600 m², and a greater diameter of 665 m. Its estimated water volume is of about 2.500.000 m3. It is connected via a shallow channel to the Straits of Messina, a stable upwelling system driven by the strong tidal currents flowing between the Ionian and the Tyrrhenian seas (Brandt et al. 1997), which strongly influences the lake ecology (Saccà et al. 2008). Another channel connects it to Ganzirri Lake.

While Ganzirri Lake is a relatively shallow coastal basin (not more than 6.5 m deep), Faro Lake features a steep sloping bottom that declines to a central region reaching a maximum depth of 30 m. Considering the correspondence of the shorelines of the lake with half graben faults, a tectonic event is the most likely explanation for the remarkable depth of this basin.

We have 3 guests and no members online